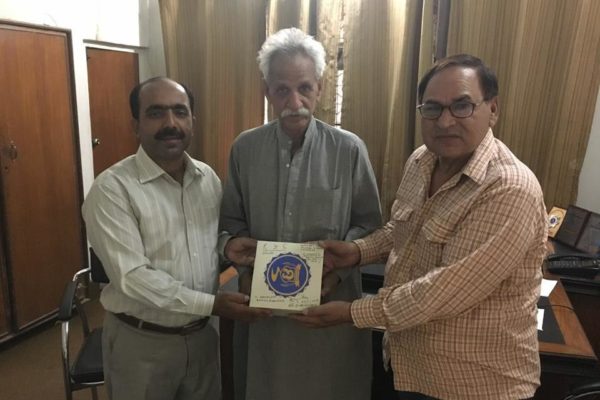 Saanjo : Alphabet of Punjabi and Allied Languages / ever created, ever invented.

I am so grateful to friends to honour me as chief guest.

I remember lovely welcome by Beeba Tariq Jatala Ji on my last visit to Lahore , about two years back also.

I highlighted in the meeting why and how Saanjo Script is our choice for our language.

It/ Saanjo is far easy script as compared to non- our – language scripts.
It/ Saanjo has perfect computer , science , math comparability.

After all our people need to to come up in sense of creativity and knowledge be in the field of arts ,science , music and social sciences.

Saanjo an all out creation and invention by itself give inspiration to our people to go creative , to go creative in every field and foster an era of indigenous growth.

The Saanjo Script is an all languages and and all dialect script ( All around ). It provides a base for fratenal , lovingly and a broader peaceful democratic co- living to move into a promising future for all we around.

There can not be non – our – language script as our identification.

The Saanjo Script created / invented for our language is the only choice as our identification script.

Note , Saanjo is a script ever created for our language , precise phonetically and it is meant for / Serve as Bridge language , language of education and National language in the valley of Rivers , areas around and around.

Saanjo Tore – Saanja Dais Stance towards naturalization and efforts to popularize the idea of renaming valley of Rivers and area around – ” Paanupr ” was also talked before the friends.

I was impressed of love Beeba Ahmad Raza Ji have for the friends who in one way or the other work for our mother language.

I up- dated the friend about appreciation of Saanjo Script here and abroad.

Beeaba Ahmad Raza Ji appreciated a lot the standing of Saanjo Script , it has attained already.

Beeba Ahmad Raza Ji noted that it is good to have done base work a head of critical relevant time.

Beeba Ahmad Raza Ji , Big thanks for extending your precious time for the event meant to mark near completion Saanjo Project ( Jan – April/ 2018 ).

All kind willing , Saanjo Sessions will be taken up again in September.

However , It is expected that I will convene Saanjo Sessions in Islamabad on April 29 and April 30 before leaving for Karachi.

I am feeling very sad to have not conducted Saanjo Session in Kasur , Kanganpur and at some places in Lahore. There were constraints of time and other constraints to limit my program.

I beg apology from the friends , who matter me a lot, in Saanjo context , for not being able to see them and convene Saanjo Sessions with them.

Note : Paano is naturalized name for Punjabi Language as an attribution to land of water / Paanipur.