“Saanjo” First Ever Script of Language of Masses – Punjabi & Allied 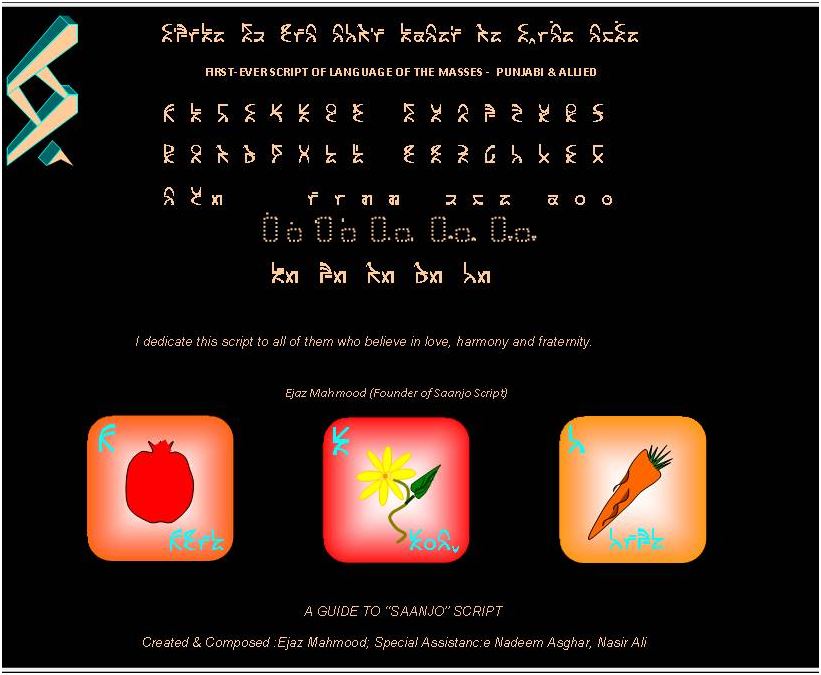 ‘Saanjo’ – The First-Ever Genuine Script of the language of the masses (Punjabi&allied) – is not only richly capable of correctly and comprehensively expressing all main dialects and sub-dialects of the language, This diverse characteristic was, earlier, unheard of in the history of the region. The ‘saanji’ (in the meanings of ‘common’) valley of the rivers Ravi, Chenab, Sutluj, Jhelum and Indusstretches from the mountains down to Karonjhur in Thar area. It had been a long cherished dream of the teeming millions of inhabitants of the valley to have a uniform, comprehensive and a pure script, which they could call their own The word SAANJO itself symbolizes inducing fraternity, harmony, and love. While going through the script, one would note that the second alphabet has been named ‘BEEBA’; which means ‘a well-behaved, good-natured and lovable lad’. This is exactly why it has been opted to give and ending of ‘…EEBA’ to the names of most of the basic letters. Likewise, taking inspiration from the word BEEBA, the Elementary Book of ‘Saanjo’ has been titled as ‘BEEB’- a new word which is meant to symbolize GOODNESS.

• By virtue of its inherent potential to correctly express our language, computer & scientific suitability, aesthetic beauty, visual effect and ability to create a vast range of calligraphy, it is hoped that ‘Saanjo’ would rapidly flourish to find its due place among the masses and that it would also be instrumental in the development of our language not only in the region, but globally, too.